That’s just the sort of thing he does.

Then he’ll tell the world it was your fault because you raised them wrong and that this was the only way he could make them contribute to society positively.

And the world will believe him. Because he’s just that good at telling stories.

Gaze into the face of your destruction:

Here’s a secret I bet you don’t really care about: I hate Daredevil.

I mean just what the hell is there to like about him? He has the super powers of being a bat. He’s a smarmy lawyer fuck, everyone he loves ‘accidentally’ dies, he’s never sure whether or not he’s having a breakdown and nobody in any Daredevil Comic I’ve ever read has ever smiled, unless they’re cutting someone up.

So yeah, I hate Matt Murdock.

It could be because he is now irrevocably paired with Ben Bad Face Affleck in my mind, but then again it could also be the relentless fucking misery that he attracts. I don’t care what you say, reading a comic book should not feel like an episode of East Enders. It’s not even for a lack of reading ‘the good stuff’. Miller, Bendis you name it, I’ve done it. But in both of those runs I’d argue that the main draw is the story, how the tale was going to be told. Even when I’m reading great writing I still feel like I hate the character. It could be because I hate blind people, but then again it could be because I hate people with more than one dead girlfriend.

The thought of reading a monthly Daredevil book makes me sick. Sick like a dog with a strong stomach and weak legs. Dirty, like a pigeon with diarrhea. If you were to tell me you followed Daredevil on a regular basis I’d probably just burn your face a little bit.

Then Mark Waid rocked up and ate my metaphorical kids, just as I’d learned to love them as much as I love my real kids. 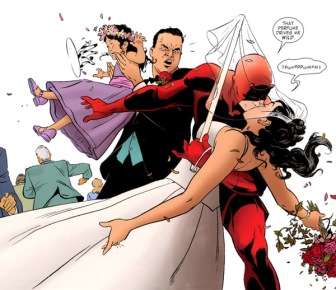 I had to be talked into picking up the first trade by everybody on the comics internet, and even then I sort of regretted it. It’s almost like I didn’t know what to do with it. I remember thinking ‘am I supposed to look at this thing?’ and so it sat on the shelf and everyone was embarrassed to talk about it, like when the dog accidentally wanks himself off. It went on for months with us not really acknowledging each other until, bored, I picked it up and actually opened it.

Comics internet you were right. I am forever sorry.

The first thing that’s going to make tears leap from your tiny face like Tom Daley is the art. It’s just staggering.  Paolo Manuel Rivera, Marcos Martin, words leave me. The visual language these guys are creating for Daredevil, the use of his powers, sound effects, his thought process, all of it is amazing. It’s so good in fact that I can’t understand how it hasn’t been done before, it’s so natural and feels exactly right. I just want to splatter superlatives at the page like some complimentary Jackson Pollock. I’ve even forgotten about the Ben CrapFlick connection, the art is that good. Even if Mark Waid filled each issue with Daredevil not being able to find his remote control or his keys or any other item that doesn’t make a noise, I would still urge you to buy this book.

The very good news is that Mark Waid is writing this book like it was a kid he was gobbling down.

The second thing about this book that will make tears jump from your eyes like tiny versions of Felix Baumgartner (all screaming ‘I’m coming home’ in tiny voices) is Mark Waid. Not just any old version of Mark Waid, but this is the Mark Waid that is stupid good at writing comics. This is the Mark Waid of The Flash, Fantastic Four and Kingdom Come. THE MARK WAID.

The entire tone of this comic is completely different to any Daredevil book since Frank Miller. Gone is the procession of dead girlfriends, gone is the wondering aloud how it all went so wrong. Instead Daredevil is a y’know…Daredevil. He does courageous things, and he does it while cracking a goddamn smile, he swings, he dances, he jokes, he laughs. It’s upbeat, it’s swashbuckling, it’s wham bam action. It’s everything you want from those pamphlets with 4 colour heros in them.

The first trade only hints at the wider story that Waid is moving into, but that’s not what this is about just yet. It’s about setting a tone. It’s about providing some optimism, it’s about letting the character heal. Which would only be natural if someone had just had a girlfriend die, been outed in the press, had another girlfriend leave him, get put in prison, taken over by a demon, started leading an army of evil ninjas blah blah blah. In fact I’d just want to give him a hug and slowly tap him on the shoulder whispering ‘let it all out big guy’.

Everyone in this book is having fun, including the ginger guy who’s normally moaning. It’s cliche, but they always say you have to learn to love yourself before other people can learn to love you, and Waid is doing just that. Letting Matt Murdock smile at himself and remind us all that he isn’t a fucktard is the best and biggest story decision he could have ever made.

Daredevil is shaping up to be an amazing book, you can literally smell the Eisners on the pages. It is drawn by Paolo Manuel Rivera and Marcos Martin and written by Mark Waid. You should go and buy it. Or Mark Waid WILL eat your kids.